The Evolution of the Student-Athlete at Notre Dame 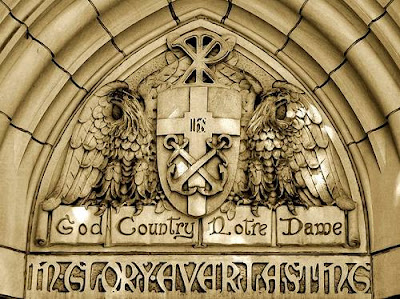 (Excerpt from Lisa Kelly's new book, "Echoes From the End Zone: The Men We Became")

“I didn’t know what in the hell I was doing when I first took the job,” said Mike DeCicco, a mechanical engineering professor at Notre Dame back in 1964 when he accepted Father Joyce’s offer to become the Chief Academic Advisor, Student-athletes, a newly created position. Notre Dame executive vice president Rev. Edmund P. Joyce C.S.C. and then President Father Theodore Hesburgh had a vision and felt a moral commitment that the University’s excellence in athletics wasn’t good enough. This was Notre Dame; and Our Lady of Victory was ready to create a new era in collegiate sports. No - these young men would become much more than mere “jocks” – instead now and forever known as “Notre Dame Student-Athletes.”

In a 1988 interview with Blue & Gold Illustrated, Mike recalled he had no idea what to do, but it was clear that Hesburgh and Joyce would know success when they saw it. “There was no template or benchmark for success. I’d sit down with a kid and ask how his school work was going. He’d say, ‘Okay.’ I’d say, ‘Fine.’ And that was that. Then when grades would be posted, I’d discover a lot were not doing as well as they said they were.” Mike quickly learned he had to stay on top of each student-athlete’s progress on a weekly basis, not once they were in academic trouble.

Mike created a methodology that would become the model for the best universities, and a standard to be adopted by the NCAA. During Mike’s time as the ND Athletic Department’s Chief Academic Advisor, ninety-nine percent who were enrolled and stayed in school for four years graduated. In 1988, Notre Dame became the first school ever to win a football national title while at the same time graduating one hundred percent of its players. Of the 59 other College Football Association member institutions who returned results that year, the graduation rate was 50.7 percent.

Mike always credited Father Joyce and Father Hesburgh for having the vision to create a position that many felt was unnecessary. “They recognized the constraints and time-factor difficulties student-athletes would eventually have with the increased emphasis on intercollegiate sports.” Mike said. The three of them felt that if they were asking athletes to give their service and energy to the University, the University at the very least could assure them an equal chance to earn a degree along with the rest of their fellow classmates.

Mike’s team set up tutorial services and a ten day orientation program which taught time management and proper study habits, and a summer school program; all of which have been a mandatory part of the academic year of a student-athlete for years. Luther Bradley and Marv Russell, two of the former student-athletes featured in this book, recalled Mike’s role in their lives.“Two-months before we arrived on campus to start summer camp, we received a letter from this guy named Mike outlining academic expectations and what he and his team would do to ensure our success in school.”

Marv recalled, “I was a good student, studying theology which is a very tough major at a religious school like ND. Coach DeCicco (also the Notre Dame Fencing Coach) called me into his office and told me what it was going to take to be successful. He said ‘Marv, this is how it’s going to be. The minute I suspect you are not cutting it or you’re having problems, we are going to reassess your major.’ He said, ‘I want you to meet with a graduate assistant every two weeks to assess your progress. Remember: you will get no breaks or special consideration.’ I did what I was told and I was successful. Forty years later I saw Coach at a Notre Dame function and he still recalled that story. What made me feel great was when he said, ‘I’m proud of you Marv and what you have accomplished.’ ”

Luther was focused on business as his major. He and Marv laughed at Luther’s story of being called into Coach DeCicco’s office for a chat, “You remember that fencing sword he had mounted over his desk? I walked into his office and sat down and all he said was, ‘You see the sword behind me? If you don’t get busy and study harder, you are going to find that sword up your ass.’ Coach never minced words.” Luther said, “I wasn’t doing that bad in class, but he felt I wasn’t working to my potential. He wanted our best just like Ara did on the field.” Both Luther and Marv said what was even more important was if you weren’t performing in the classroom you could bet Ara knew and it was likely Moose Krause the AD knew and you were going to hear from all them.

The football players interviewed in this book all realize how they benefited from the evolution of the Notre Dame “student-athlete” concept. Notre Dame is not an easy place for any student, let alone for those who have the additional demands of athletics. Without this visionary program, many athletes would be left by the wayside, as they are at so many other schools. Today, thanks to the leadership of Mike DeCicco, Father Hesburgh and Father Joyce, Notre Dame consistently leads NCAA schools in graduation rates and overall academic performance.

Coach DeCicco passed away in the spring of 2013. His impact on Notre Dame and the NCAA schools will be a legacy for decades to come. Notre Dame student-athletes owe a debt of thanks to this Loyal Son.

Mike DeCicco was Notre Dame at its finest – he was the Notre Dame Value Stream at work.