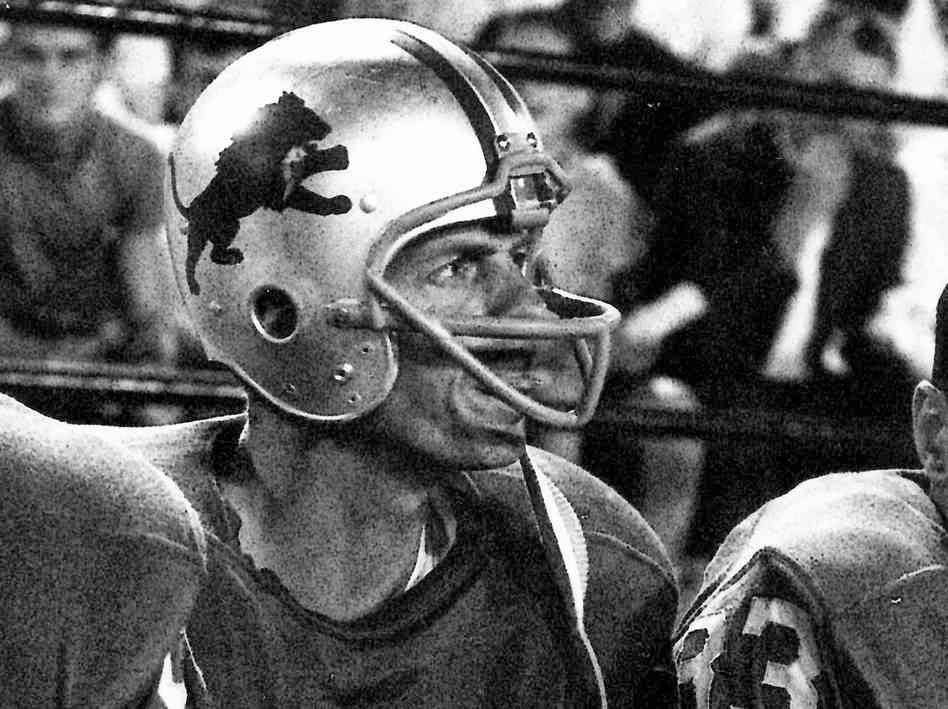 Okay, George Plimpton may not have been a starting quarterback for the Detroit Lions ... but he did play for them at quarterback. He also played goalie for the Boston Bruins, got Willie Mays to pop out in Yankee Stadium, boxed against light-heavyweight champion Archie Moore, acted alongside John Wayne, Warren Beatty and Matt Damon; photographed Playboy models, and authored more than 15 books, including Out of My League (1961), Paper Lion (1966) and The Bogey Man (1967). Who is this George Plimpton you ask?

Famed participatory journalist George Plimpton (1927-2003) was a writer, editor, amateur sportsman, actor and friend to many. The American Masters series is showcasing his remarkable life in Plimpton! Starring George Plimpton as Himself, premiering nationally this Friday, May 16, on PBS (check local listings).

Fellow Notre Dame author, Jerry Barca, author of Unbeatable was one of the producers (along with another ND Alum) of this feature on George Plimpton and gave me the opportunity to view it in advance of its airing. Seeing as George Plimpton's writing style was a lot like my "Where Are They Now" pieces in a Q&A writing style ... I thought I'd do a little Q&A with Jerry Barca to let you hear more about this upcoming documentary.

Q: Why did you decided to do the documentary about George Plimpton?

A: "Well, I became involved in the project in early 2010. The film is the brainchild of the directors Tom Bean and Luke Poling. Luke had the light-bulb moment when he took a look at his book shelf and noticed Plimpton's Open Net and he realized no one had done a film on Plimpton. Luke spoke to my business partner and the co-founder of Joyce Entertainment, Dennis Joyce, a double Domer, '98 and '03 MBA. They were at dinner in 2008, Luke pitched the idea. Dennis loved it and provided funds for the project to begin immediately."

Q: What drew you to George Plimpton?

A: "The man lived an amazing life. It is remarkable and inspiring when you realize all he did and all he accomplished, from his writing, his groundbreaking sports journalism, his literary exploits and even his relationship with the Kennedy family. His life is the type of story that begs to be told."

Q: Do you feel your writing style took any guidance from George Plimpton?

A: "On the surface, Plimpton is known for stunts - playing quarterback for the Detroit Lions, goalie for the Boston Bruins, pitching to Willie Mays at Yankee Stadium - but I tell people if that is all you know, you're missing out on a lot. Those "stunts" are a literary device that serve as the entry point, one where George takes you into the world of each endeavor. My biggest take away from reading his work is to get out of the way of the story and let it, the story, be told. He did that so, so well."

Q: How was working on this documentary different from writing the book Unbeatable?

A: "While the focus of both is on telling good stories that people will enjoy, they're very different, especially my role. Tom Bean and Luke Poling, the directors, did a wonderful job telling George's story. They are really the "authors" and I'm a role player on a great team. Being the author of Unbeatable, that means I'm the one accountable to produce the research, interviews, and craft the story."

Q: What was your favorite story from the George Plimpton documentary?

A: "You know I love sports, and there is so much great stuff there from boxing to football to baseball and even the trapeze work. But the stuff Tom Bean and Luke Poling were able to unearth with regards to George's interviewing Ernest Hemingway and George's relationship with the Kennedy family is pure brilliance. Those parts just show you how big George's life was. He intersected with history that will forever be studied."

Q: What can we expect next from Jerry Barca? Another book? Another documentary?

A: "I've got another book cooking. A non-fiction sports book. I love immersing myself in the research and then crafting a narrative readers will enjoy. Thanks so much for taking the time to watch Plimpton! We are really so excited to share it with people, and thanks for taking time interview me."

Please do me a favor and check out this wonderful documentary about George Plimpton. It's a wonderfully crafted story of a participatory journalist who literally 'knocked himself out to get the story.' He had a never-ending curiosity about life and never let his fears govern him.

"George's life was about seeking out and trying new things, regardless of the outcome. And as an artist, life was his greatest work of art," said co-director, c0-writer and co-producer Tom Bean. "We hope Plimpton! inspires audiences to find that adventurous spirit within themselves and the desire to live life to the fullest."

"For the uninitiated, we hope our introduction makes new audiences fall in love with George Plimpton. For the people who knew and read him, we hope our movie brings him and his joie de vivre back for 90 minutes," added co-writer and co-producer Luke Poling (Twelve).