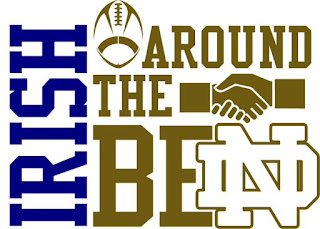 Being a student-athlete at Notre Dame is more than a full-time job. Beyond time spent learning in the classroom and studying outside of the classroom, their time is filled with meetings, film study, weight room time, training table and practice. In addition to all of that, somehow, Our Lady's student-athletes also find time to give back to the local community.

This past Sunday the Notre Dame football team took 110 LaVille kids-in-need on a shopping trip to Meijer courtesy of the Kelly Cares Foundation.

"They love doing this more than you can imagine," said Notre Dame football head coach Brian Kelly. "They love getting out with the kids and spending time with them."


This year's shopping spree was sponsored by the Kelly Cares Foundation for the fourth year, and the players enjoy it just as much as the kids do.

"It's a blast for us," says Irish captain and defensive back Matthias Farley. "I think it's a lot of fun for them too. Coming out here and obviously Charles is pretty excited about the stuff he got today so it's awesome being a part of it."

Each child was given a $100 gift card to make their purchases. For the children who went a bit over their budget, Meijer covered the difference.


"We had a great time," says Prosise. "She got to get some things for her family and for herself. Got some footballs and soccer balls to play outside so she got some nice things."

"Being that we don't get a chance to go home for the holidays as much as we want to," Zaire began to say.

"Yeah. we get to extend our Notre Dame family to everyone else so it's a good chance to come out and share that with the people in the community and with each other so it's a good feeling," Zaire said.

"At least you get to spend Christmas with some friends at school," Harley said.

"Friends at school and I get my friend Harley here too," said Zaire.

Following the afternoon of shopping, the players and kids were treated to lunch at Papa Vino's.
Cheers!!