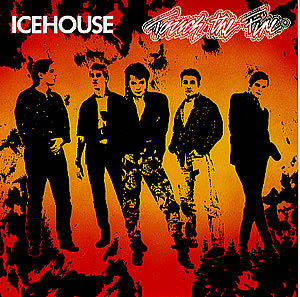 Today's edition of Retro Friday features the songs Crazy and Electric Blue, by the band Icehouse.

One of my high school friends, Hillary, turned me on to the band Icehouse. If I recall correctly, it was her boyfriend's favorite band, but I really grew to like them myself.

The rock band Icehouse originated in Sydney, Australia in 1977 as the band Flowers. They were initially known in Australia for their pub rock style. They later achieved mainstream success playing new wave and synthpop style music, and attained Top Ten singles chart success in both Europe and the U.S. The driving creative force behind both Flowers and Icehouse has been Iva Davies (singer-songwriter, record producer, guitar, bass, keyboards, oboe) supplying additional musicians as required. The name Icehouse, which they adopted in 1981, comes from an old, cold flat Davies once lived in.

Some of my favorite Icehouse songs are Crazy, Electric Blue, Man of Colours, and No Promises ... with Crazy and Electric Blue being my all times favorites!

Crazy and Electric Blue kind of became my theme songs or the sound track of my later college years at Notre Dame. I had developed a crush on this boy (only because it was pointed out to me that HE was looking at ME), who had the bluest eyes EVER, and so Electric blue kind of became HIS song.

Once I realized that he had been looking at me, then I became much more interested in him, and then after that it seemed as though we were often times in circumstances where he was doing something embarrassing ... or I was doing something embarrassing. Including, but not limited to, me almost fainting in the middle of North Quad ... and me ACTUALLY fainting at the Notre Dame/Michigan State game in the fall of 1992. Oy vey.

So anyways, before I give away too much information regarding this mysterious crush from days of old ... here is a little Icehouse for your listening pleasure! 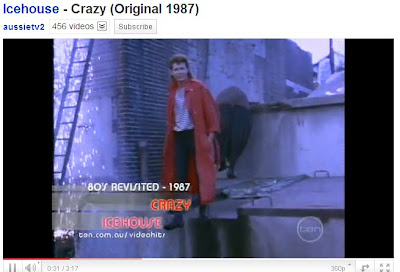 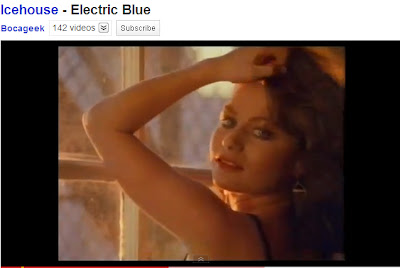 Today's edition of Retro Friday features the song Obsession, by the band Animotion.

Animotion is a 1980s U.S. New Wave band from Los Angeles, California, best known for their song "Obsession," written by Michael Des Barres and Holly Knight. The band began in 1983, born out of the remains of a retro science-fiction band called Red Zone They signed a record deal with Polygram Records in 1984 and made three albums.

The song Obsession reached number six in the United States on the U.S. Billboard Hot 100, and number five in the United Kingdom on the UK Singles Chart in early 1985, helped by a distinct video that received heavy rotation on MTV.

The music video features the Animotion band members — focusing on the two singers, Bill Wadhams and Astrid Plane — dressed in various costumes (such as Mark Antony and Cleopatra) while performing the song next to a swimming pool.

This song holds special meaning to me on this particular day. Today is my husband and my wedding anniversary, and this song played an important role on the day we met.

My friend B and I went upstairs to request songs from the DJ. If I remember correctly she requested a song by A Flock of Seagulls, and I requested Obsession by Animotion. We headed back downstairs to the dance floor, and not only did he play my song, but he also came down stairs and watched us dance while my song was playing. I was pretty stoked, because he was pretty darn cute, and I thought that it meant that he liked me.

Uh, no. After my song, he ended up talking to my friend B for a while, and then at the end of the night they swapped phone numbers. Aghh.

They ended up talking on the phone for a few weeks, until he figured out that she already HAD a boyfriend, and then that was the end of him and B. A few weeks after that, I went back to the same club with another friend, and he was there again. This time he and I ended up talking, and then WE exchanged phone numbers ... and then six months later he was down on one knee proposing. And now 16 years later he is still my best friend and the love of my life! So thank you very much to that cute DJ for playing my song Obsession ... and the rest, as they say, is history!

And for your listening pleasure, here is Obsession, by Animotion! 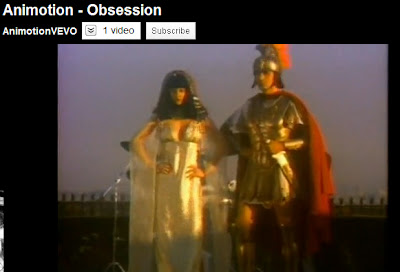 Sympathy for the Devil

This week's edition of Retro Friday features the song Sympathy for the Devil by the Rolling Stones. 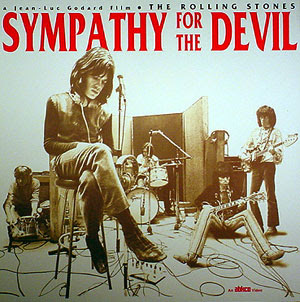 While this particular song does not really qualify as "Retro Music" (Retro Music is more classified as alternative music from the 80's and early 90's) ... in light of this week's events, this is today's song!

When I was at Notre Dame we hung out with these guys who had a band called Bughaus. They played a great mix of cover tunes ... some current songs, some songs of old, and a few original songs of their own. They played at many bars around town, in addition to house parties as well. Most of the house parties that they played at were in houses of architecture students, as one of the band mates was an "Arky" guy ... and all of the "Arky houses" had names. The Potatoe House. The Bug House. The Bucket.

One fine weekend we get an invite to a party at The Potatoe House, featuring the band Bughaus ... but the party is entitled "Puzzle's Wake." The ticket reads (and yes, I still have the ticket in my scrapbook!): Bughaus solemnly presents PUZZLE'S WAKE, Sympathy for the Beagle. As it turns out, their beagle "Puzzle" had passed away, and hey, why not turn their loss into happiness ... and what better way to celebrate their dog's life than by having a wake/party in his honor.

It's funny ... the most vivid thing I remember about this party, other than the tickets, was the playing of the song ... Sympathy for the Devil.

Please allow me to introduce myself
I'm a man of wealth and taste
I've been around for a long, long year
Stole many a man's soul and faith

So here's what really prompted me to use this song today. When my husband and I were dating, I bought him this precious little orange and white kitten, which he named Taz in honor of the bar that he worked at, Tasmania. Then in return, he bought me this precious little black and white kitten, which I named Puzzle, in honor of the dog from way back when in college.

Within the last 9 months, we have buried both kitties. Puzzle fell asleep quite peacefully, and entered into her extended kitty nap ... but Taz did not have such an easy go. On Wednesday of this week, Taz was attacked by a neighborhood dog, who was quite large and ended up crushing his shoulder and part of his spinal cord. I rushed home from work and we took him to the vet, but there was nothing that they could do. We all said our goodbyes, and now he and Puzzle are enjoying their extended kitty nap together.

So this song is for Taz and Puzzle ... may you have all of the milk you wish for in heaven ... and plenty of mice to chase.

And for your listening pleasure: Sympathy for the Devil 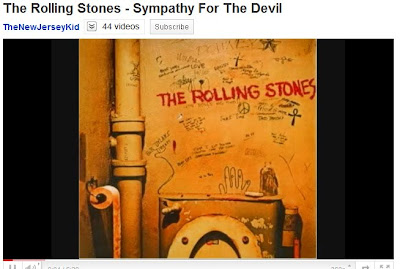 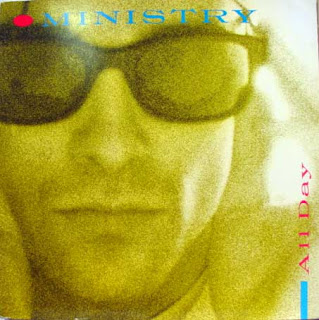 This week's (early) edition of Retro Friday features Ministry, and the song Everyday is Halloween.

Little did I know back in the 80's how much this song would someday resemble my life.

Everyday Is Halloween is a 1984 song recorded by the band Ministry, re-released in 1986. The title and lyrics refer to the goth subculture which emerged in the 80's, in particular the clothing ... "I dress this way just to keep them at bay". The song lyrics also question the intolerance and lack of acceptance for others who are different.

As many of you know, my husband and I run several Haunted Houses in the midwest during the Fall/Halloween season, and build them for clients all over the world ... all year round. Halloween is more of a way of life in my house, as opposed to a seasonal event, which many people just don't understand. It is not your run-of-the-mill career path, that is for sure, but we really enjoy it! I think it is a blessing that we've been able to turn a hobby that we enjoy into a career that we can make a living doing, but still ... amazingly enough ... many people do not see it that way. Oh well, their loss, right?

Okay ... here's a little Ministry for your listening pleasure! Hope you have a great Friday! 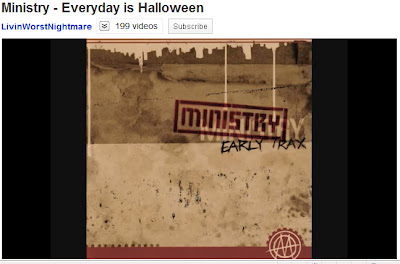 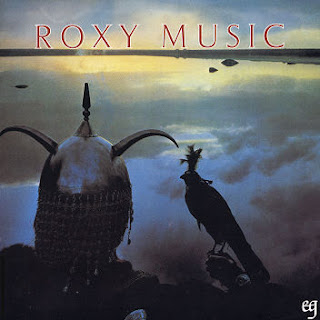 One of my dear High School friends turned me on to a lot of music that I listened to in the late 80's, and Roxy Music was one of them.

Roxy Music attained popularity in the UK, Europe and Australia during the 1970s and early 1980s, beginning with their debut album, Roxy Music, recorded in 1972. The band was very influential to other UK and European bands as a leading proponents of the more experimental, musically sophisticated element of glam, along with a significant influence on early English punk music. They also provided a model for many New Wave acts and the experimental electronic groups of the early 1980s. The group is known for their sophisticated visual and musical style and their preoccupation with glamour.

By far, my favorite Roxy Music song/album is Avalon.

The album Avalon was released in 1982 and was Roxy Music's eighth (and as of now, final) studio album. The album was the best example of the smoother, more adult-oriented sound of the band's later work. It was a huge commercial success. It hit in the UK for 3 weeks, and then stayed on the album charts for over a year. Bryan Ferry's girlfriend, soon-to-be wife, Lucy Helmore appeared on the cover wearing a medieval helmet and carrying a falcon, as a symbolic image of King Arthur's last journey to the mysterious land of Avalon.

Plus one of my happy places on earth is "Avalon" on Catalina Island ... so maybe the song kind of reminds me of that as well!

Anyways ... here's a little Avalon for your listening pleasure! 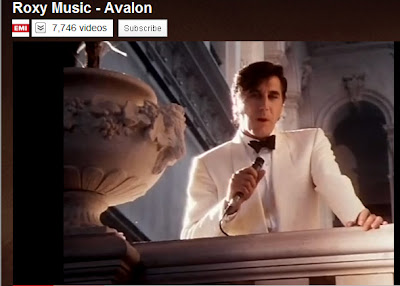 World In My Eyes 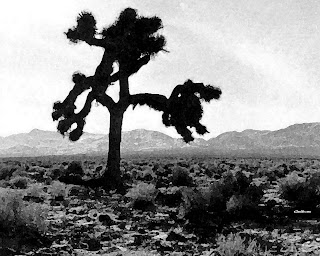 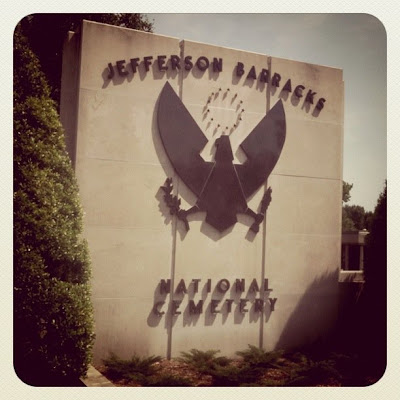 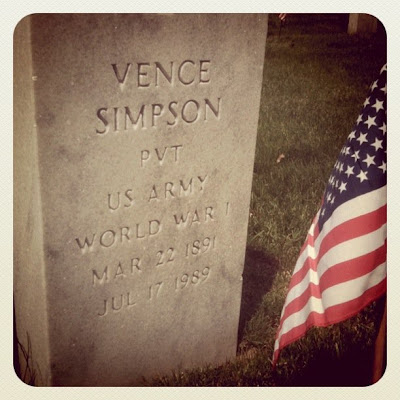 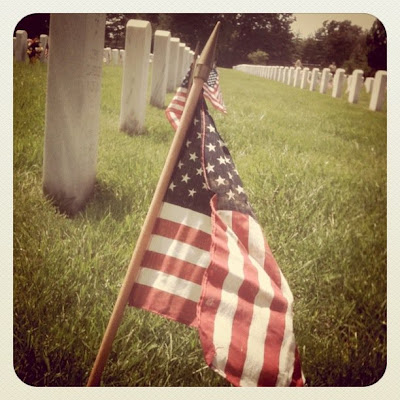 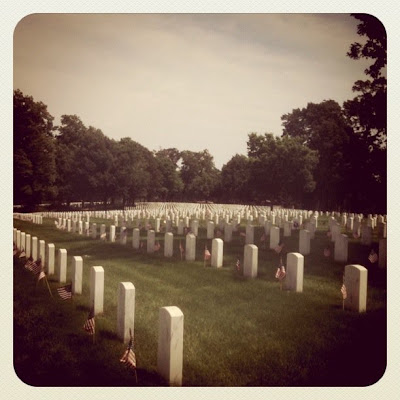