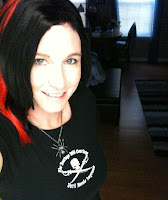 Here I am, in all my goth finery (it is October after all!) to present to you my doomsday predictions. I had high hopes for Notre Dame at the beginning of the season. Maybe not the 10-2 that some of my friends were predicting (sorry JB!), but high hopes all the same. But now, midway through the season, my hopes are not so high. And unlike so many people who seem to be drinking the kool-aid, I am not.

So here they are ... my predictions for the rest of the season. I figured I might as well put them in writing, so that I have something concrete to look back on, and either praise or criticize, later!

November 20 vs. Army @ Yankee Stadium ... Win (though Army probably won't be a pushover either!)

November 27 @ USC ... Loss (after their tremendous performance against Stanford, and our lackluster 4th quarter performance versus Pitt, I see NO WAY we go into USC's house and beat them. No way.)

So that brings us to a 6-6 season. Really ... did we honestly expect more than that? It's Brian Kelly's first year at Notre Dame. He's not working with his players yet. It is a rebuilding year, right? So we should not be happy with 6-6 ... but we should not be surprised either!

So there they are ... in writing for all to see! What say you?