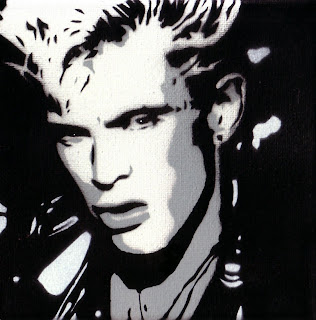 William Michael Albert Broad, better known by his stage name Billy Idol, is an English rock musician. He first became famous in the punk rock era as a member of the band Generation X. Then he embarked on a successful solo career, which was aided by a series of stylish music videos, making him one of MTV's first stars. Idol continues to tour with guitarist Steve Stevens and has a fan base that stretches the globe.

Idol was born in Stanmore, Middlesex. The name Billy Idol was inspired by a schoolteacher's description of Billy as "idle".

Idol's solo career began with the record titled Don't Stop, which included the Generation X song "Dancing with Myself", and a cover of Tommy James & The Shondells' song "Mony Mony". Both songs became his first singles and remain part of his classic live setlists as recently as 2010. In 1982, Idol became an MTV staple with "White Wedding" and "Dancing with Myself". (Two of my all time favorite Billy Idol songs.)

I have two Billy Idol stories. The first of which I mentioned earlier this week in my Bon Jovi post, but I think it bears repeating. When I was a Senior in High School, my girl friends and I went to see our first BIG rock concert ... Bon Jovi. We were SO excited about finally making it to a big concert. And when we got to our seats, who else did we see at the Bon Jovi concert?? None other than Billy Idol!! I'm not sure what was more memorable about that night. Seeing Bon Jovi IN concert ... or seeing Billy Idol AT the concert!

My Freshman year at Notre Dame there were four of us who became pretty tight. My roommate from Kansas and myself ... and two other girls who were also roommates ... one was from Pittsburgh, PA and one was from New Jersey. The two other girls, who we spent so much time with, had decorated their room with quotes from movies and songs, and one of our very favorite quotes that was hanging on their wall was from Billy Idol's song "Dancing with Myself" --

If you look really closely behind us, on the wall ... you'll see the Billy Idol quote!! (Please disregard the big hair ... geesh!) 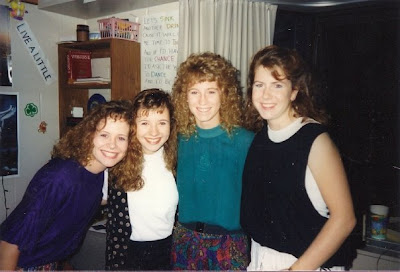 Okay ... have a rockin' Memorial Day weekend, and here is some Billy Idol for your listening pleasure ... Dancing with Myself!! 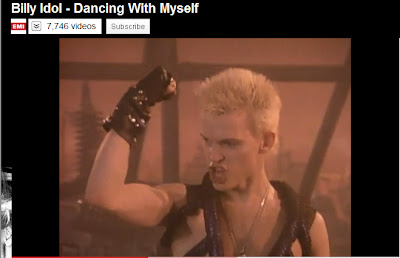 Music really is such a big part of my life. Little things, like a song that sparks a memory, or brings back a very specific emotion.

And the funny thing about my taste in music is that I don't just like one type of music. I know that I do Retro Friday posts most Fridays, but really, I like almost all kinds of music.

My parents' music taste have made a distinct impression on some of the music that I listen to. I enjoy a lot of the music that they listened to when I was a kid, because it brings back such great memories of a carefree, happy time.

Twice this week I have stumbled across songs by the band America ... and it just brings back such a warm and happy feeling for me. Happy memories of my childhood, and happy memories of time spent in California.

Although Ventura Highway is my all-time favorite America song, this week the song Sister Golden Hair is really stuck in my head. So I thought I'd share it with you tonight. Here are the lyrics ... and the song for your listening pleasure! 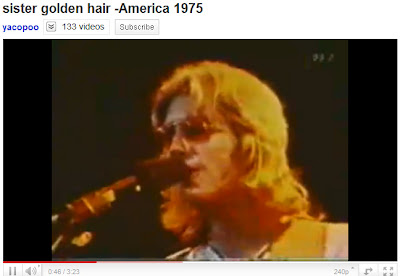 Well I keep on thinkin' 'bout you
Sister golden hair surprise
And I just can't live without you
Can't you see it in my eyes?
I've been one poor correspondent
I've been too too hard to find
but it doesn't mean
you ain't been on my mind

Cheers, and stay safe in the storms tonight!

Wordless Wednesday ... Another Storm's A Brewin'

Wordless Wednesday ... Another Storm's a Brewin' 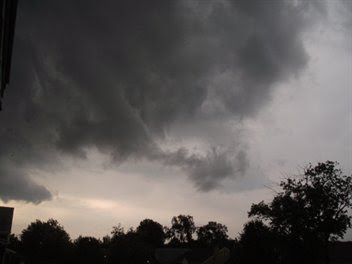 Friday was an all around crazy day ... lunch with new friends, cars breaking down, fashion shows, karaoke ... and Retro Friday just didn't happen. So for your listening pleasure, here is a special edition of Music Monday!

Last night I had the distinct pleasure of seeing Bon Jovi in concert. The last time I saw Bon Jovi in concert I was a Senior in High School (and we'll conveniently leave the year off of that one), and though Jon has changed a bit, he was every bit as good as I remembered him to be! Although, I do have one small pet peeve about last night's concert. Apparently, for most of the shows on this tour Bon Jovi hit the stage late, and last night was no different. The concert was supposed to start at 7:30pm, and it was darn near 8:30pm before they hit the stage, and I'm sorry ... that is just not cool. Our time is just as valuable as Mr. Jon's is, and if you don't want to come out on time at 7:30pm, get a freaking opening act. I'm just saying.

But other than that minor snafoo, the concert was awesome, and I bought a t-shirt, as I'll probably never go see Bon Jovi ever again, but it sure was fun last night.

Before I give you some Bon Jovi for your listening pleasure, I'd like to share two of my (many) Bon Jovi memories with you. One of old, and one of new.

When we saw Bon Jovi the first time around, I was living in Los Angeles. And when you live in Los Angeles, it is not unusual to see famous persons at entertainment or sporting events ... or at restaurants for that matter. So here we are, 17 years old, at a Bon Jovi concert, SO very excited to see Jon Bon Jovi, and who do we see but none other than ... BILLY IDOL. Yep, you know you live in L.A. when you see Billy Idol at a Bon Jovi concert!

My story of new is as follows. I had the great pleasure of sitting with Blues Defenseman Ian Cole at a St. Patrick's Day Parade gala this spring. We were sharing stories of Notre Dame, and stories of hockey, when the conversation changed to music. I was telling Ian how my husband and I had tickets to see Bon Jovi in May, and he commented that he never really had gotten into Bon Jovi. To which I replied, "well, you're probably not in the right age bracket for Bon Jovi." I continued on, "I saw Bon Jovi in 19XX, which was what ... the year you were ...?" and he finishes, "born."

Dang, do I feel old!

Okay ... enough of my Bon Jovi mumblings ... here is a little Wanted, Dead or Alive for your listening pleasure. 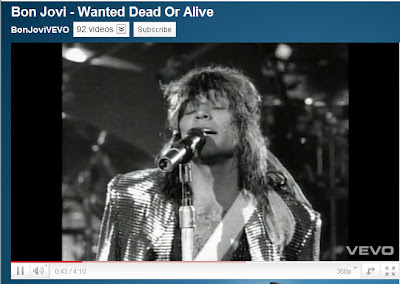 When the videos I took last night are finished processing at YouTube, I'll link you to those as well!

P.S. Oh & I decked myself out in 80's garb for the concert, which made it all the more fun ... even if I did look more Madonna-like than Bon Jovi-like!
Posted by Bridget McGuire 1 comment:

For all of the guys out there who follow Retro Friday, I am sorry ... today is going be a girlie post! (Although the surfer girls in bikinis below may make up for it!)

On Monday, when I was in quite the funk after my air conditioner broke and I was in need of some 80's music therapy, this was one of the songs that helped pull me out of my funk ... and I thought hey, what a great Retro Friday song!

"Cruel Summer" is a pop song originally performed by Bananarama that was a top ten hit in Britain in 1983. Sara Dallin of Bananarama told The Guardian that the song “played on the darker side (of summer songs): it looked at the oppressive heat, the misery of wanting to be with someone as the summer ticked by. We've all been there!”

I love the song Cruel Summer. It totally reminds me of summer days in High School spent at Zuma Beach or Paradise Cove in Southern California. 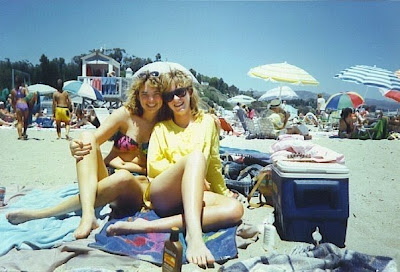 I think the other reason why is reminds me of summer so much is because there was a remix of the song Cruel Summer that plays over the opening scene of the movie Blue Crush (yes, surfer chick flick movie), and I love, love, love that movie, too! 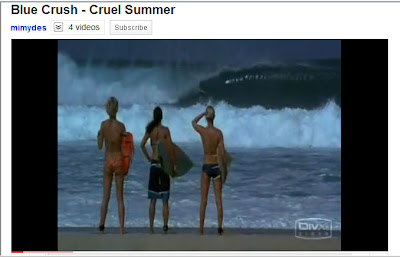 So as we approach Memorial Day, and the kick off of summer, here's a little Bananarama, AND the Blue Crush remix as well, to brighten your Friday! 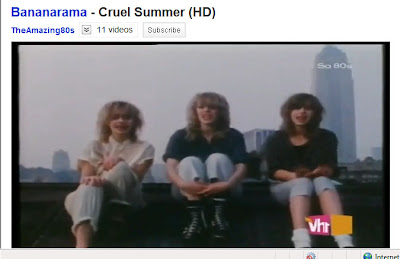 Nothing upsets a busy but otherwise productive week more than waking up to find that the air conditioner doesn't work. Grrr. 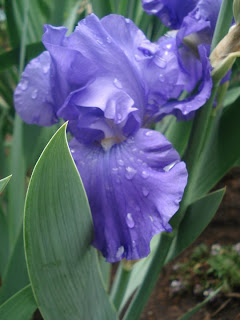 I am normally a glass half-full ... shiny happy people person ... but being overheated while I am trying to get things done really sets me off.

So when I got to work, I plugged into my happy music station ... KROQ2, the 80's HD2 station ... and here is my make me happy playlist from the morning!

Hope you're having a better day than I am!