This week's edition of Retro Friday features Morrissey and the band The Smiths.

You really can't talk about retro music without talking about Morrissey, and his career both with The Smiths, as well as his solo work.

Steven Patrick Morrissey was born on May 22, 1959, and was primarily known as Morrissey. He rose to popularity in the 1980s as the lyricist and vocalist of the alternative rock band the Smiths. The band was quite successful in the UK but broke up in 1987, and then Morrissey began his solo career, making the top ten of the UK Singles Chart in the United Kingdom on ten separate occasions. He was widely regarded as an important innovator in what is now known as indie music.

Morrissey's lyrics have been described as "dramatic, bleak, and funny vignettes about doomed relationships, lonely nightclubs, the burden of the past and the prison of the home." (Tom Gatti, The Times) He is also known for his unique baritone vocal style, his quiff haircut, and his dynamic live performances.

My top three favorite songs from Morrissey/The Smiths could not be more different.

"The Last of the Famous International Playboys" was the third single released by Morrissey. It reached number six in the UK Singles Chart. It is a very upbeat and playful song that tells the a story of the notorious pair of vicious London gangsters known as the Kray twins (Ronnie and Reggie Kray), who held a tight rule on the East End of London during the 1960s. The title also alluded to the Nancy Sinatra film The Last of the Secret Agents; Sinatra was an icon, and later friend, of Morrissey's since his youth. 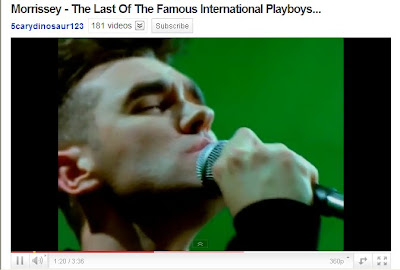 My second favorite song, from The Smiths, is "How Soon Is Now?" which was originally a B-side of the 1984 single "William, It Was Really Nothing." Although a club favourite, "How Soon Is Now?" did not chart as well as writers Morrissey and Marr had expected ... but it's haunting sound got it featured in two witchy movies/shows. It was on the soundtrack of The Craft, and it was the theme song of the T.V. show Charmed for all eight seasons. 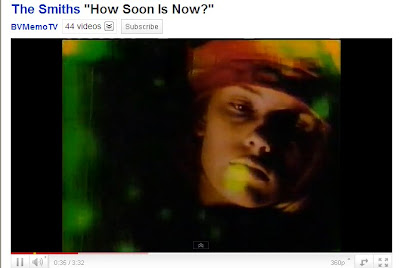 My third favorite song, by Morrissey, is "Every Day is Like Sunday." It is the third track of Morrissey's debut solo album, Viva Hate, and the second single to be released by the artist. It made number nine in the UK Singles Chart and remains one of his best-known songs. Morrissey has been quoted as saying that there is 'something strangely depressing about a seaside town out-of-season'. The lyrics are inspired by Nevil Shute's novel On the Beach, about a group of people waiting for nuclear devastation in a beachside town in Australia. 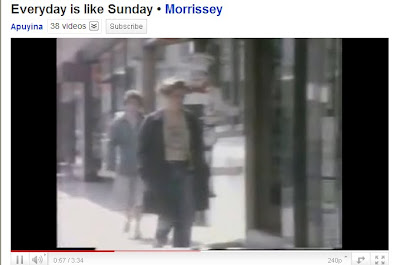 Oh, and since I've got you here, can you please do me a favor and stop by and cast a vote for me in the 2011 Sexiest CyberGeek contest??

Haven't heard of it? Here's the low down!

A long time ago in a galaxy far, far away we solicited nominations for our third annual search for the brightest online hotties in the St. Louis Cybersphere. So, without further ado, we would like to present to you our 2011 Sexiest CyberGeek nominees and open the polls to begin voting! Click here to vote!!

One Door Closes, One Door Opens

Lately, I feel like my life has been full of transition. I seem to have drifted away from a few of my friends. And while that is painful and upsetting to me, it's amazing to see that when one door seems to close, another one right behind it opens up!

Over the last year, I have made some amazing new friends through this thing called Twitter. I have met some amazing people through the St. Louis Social Media Club, including two of my bestest dinner going pals @u2acro and @JennCloud. It is just amazing to me how instantly we've clicked and how much we have in common!! Thank you ladies ... you rock!! 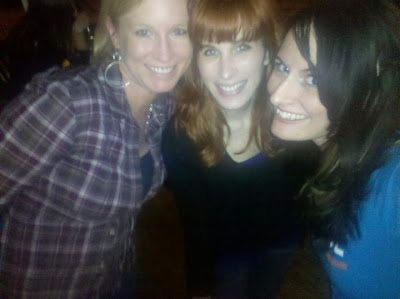 I have also made some amazing friends through the Twitter group @TNNDN ... otherwise known as The NEW Notre Dame Nation! We have created an awesome, POSITIVE group of Notre Dame fans that have formed a really wonderful community ... full of amazing new friendships, sharing a passion for Notre Dame and community service.

I got a chance to meet some of these folks, including some of the current football players, this past weekend while at Notre Dame for the Blue and Gold spring game ... and I just couldn't be happier or prouder to call these folks my friends!! 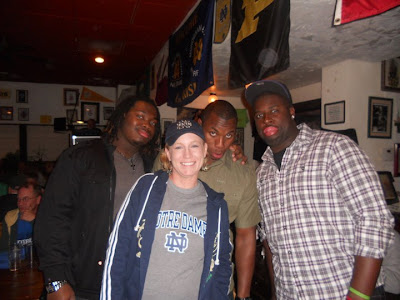 And just when I thought life couldn't get any better, this falls into my lap!! Apparently I have been nominated for "Sexiest Cyber Geek of 2011!!" Here's a little snip-it from the article and the link in case you'd do me the favor of voting!! (By-the-way, you can vote once a day until May 6th!!)

Sexiest CyberGeek Nominees! By Melody Meiners
Tuesday April 19, 2011
A long time ago in a galaxy far, far away we solicited nominations for our third annual search for the brightest online hotties in the St. Louis Cybersphere. So, without further ado, we would like to present to you our 2011 Sexiest CyberGeek nominees and open the polls to begin voting!

Lisa has quite the diverse range of interests and backgrounds. She is a social media marketer, a haunted house aficionado, an artist, designer, and her Twitter handle is a nod to her status as a proud Notre Dame Fighting Irish alumnus. Lisa is a St. Louis transplant from Pittsburgh, Pennsylvania yet counts the Mizzou Tigers among her favorite teams (way to embrace your new home town!) She is also, “A Twitter maven,” and, according to the folks who nominated her, “quite attractive in person, but never plays it up on Twitter.”

So once again, I am totally amazed at how wonderful life is ... and just when I think a heavy door is closing ... a new, happy, wonderful, light door opens in it's place!

Peace and happiness to you all today!

This week's edition of Retro Friday (I mean, Music Monday) features the band Squeeze, and the song Pulling Mussels From the Shell.

Squeeze is a New Wave band out of Britain that emerged during the 1970's, and continued recording successfully into the 1980's and 1990's. I don't know what it is about Squeeze music that makes me feel so happy-go-lucky, but ever since I can remember, when ever I hear a Squeeze song on the radio, it just brings a ray of sunshine into my day.

My two favorite Squeeze songs are as follows ...

Pulling Mussels From the Shell

Something about this song just makes me want to burst out in song and dance around the room. Weird, I know, but it is what it is!

And my second favorite Squeeze song is ...

Such a great little song. Probably Squeeze's best known song. It was originally recorded in 1981, but then was re-recorded in 1993 for the "Reality Bites" soundtrack (great film, too!) ... Tempted '94.

So as I head off on yet another road trip ... here is some Squeeze for your listening pleasure!

Pulling Mussels From the Shell 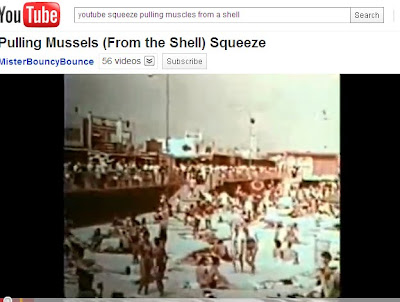 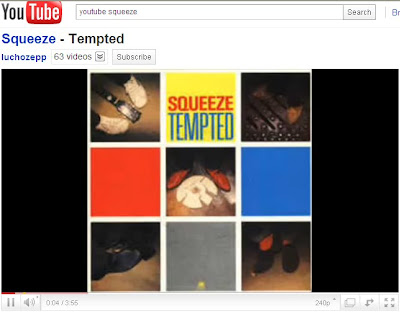 This One Goes Out to the One I Love

Today's edition of Retro Friday features the band R.E.M.
R.E.M. is an American rock band started in Athens, Georgia, in 1980 by singer Michael Stipe and guitar player Peter Buck. R.E.M. was one of the first popular "alternative" rock bands, and gained early attention due to Stipe's unclear vocals, and Buck's unique guitar style.
Their first mainstream hit came in 1987 with the single "The One I Love," which is one of my all time favorite R.E.M. songs!! 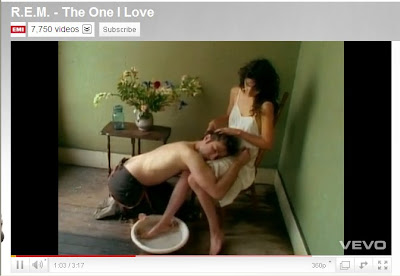 Though I was a big fan of R.E.M. in High School, R.E.M. is a big part of many college memories of mine. Freshman year, I was pretty much a goodie two-shoes. I was uber serious about school, and pretty much followed all the rules and stayed inside the lines. My roommates, on the other hand, seemed to be living life to the fullest freshman year! And it's not that I regret being Miss Goodie Two-Shoes that year, as it did help me become the person I am now, but it did cause me to miss out on a few things ... one of which includes the R.E.M. concert that year.
Notre Dame did a great job of bringing big concerts to campus. When my friends found out that R.E.M. was coming that fall ... they were SO excited. And it's not that I WASN'T excited ... I just, in my Miss Goodie Two-Shoes mind, decided that that was a non-essential expense, and that I would save my money and not go to the concert. Dumb, dumb, dumb! So my friends camped out for tickets, and had an awesome time at the concert, and honestly ... I can't even remember what I did that night, or who I hung out with, but to this day, that is one of my few regrets from college!
Moving forward ... my Aunt bought me a guitar when I was in High School, and I took it with me to Notre Dame thinking that I would have time to take lessons. Time? What is that? So in lieu of taking lessons, a good friend of mine, who was an awesome guitar player and did not bring his with him to school, would come over and hang out in our room and jam on my guitar. Oh how I loved those jam sessions. He would play my guitar, and occasionally I would sing along. And, of course, one of my favorite songs that he would play on my guitar was "The One I Love" by R.E.M. Plus, it didn't hurt that I had quite a crush on the guy!
And my final "The One I Love" memory ... after I graduated from college, I dated a guy (whom I married and have been happily together with for almost 16 years!) who ran a bar for four years. And one of the many perks of running a bar is LOTS of concert tickets. One of the most memorable shows that we got tickets to in those four years was Bush at Riverport Ampitheater. My boyfriend was unable to go with me to the concert, as he had to work at the bar, and so I took my friend Lora with me. The tickets ended up being FRONT ROW seats, right in front of Gavin's mic. Ahhh, heaven. When he came out to play the first encore, he started with R.E.M.'s "The One I Love." He looked RIGHT AT Lora and I and sang the song to us. I swear I thought I had died and gone to heaven.
Of course, now that I have kids and try to expose them to as many retro songs as possible, they really like the R.E.M. song "It's the End of the World" ... and they love the fact that I know every word to this song!! 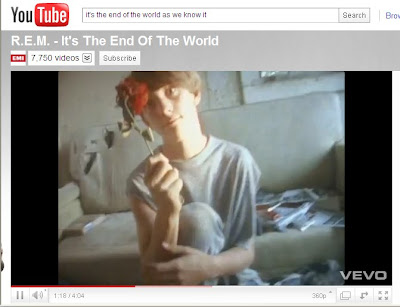 So I hope you've enjoyed my little walk down memory lane with R.E.M. and hope you enjoy a little "It's the End of the World" tunage!

Posted by Bridget McGuire 2 comments: Links to this post