There are some people who you meet, who carry with them such a warmth, who always have a smile and an infectious laugh for you, and instantly become someone who changes you, who you’ll never forget. Braxston Banks was just such a person.

You may have heard, the Notre Dame community has lost yet another one of its gentle warriors, Braxston Banks. Braxston was a star running back at the University of Notre Dame and played on the 1988 National Championship team. He had no idea that he had heart disease until he went to the hospital last week and discovered that three of his four coronary arteries were blocked. The procedure to put stents in was successful and Braxston was sent home, only to have the pain return the following day, and upon returning to the hospital, he passed away.

This week, as we all wrap our heads around this loss to our Notre Dame family, I have had the chance to catch up with a few of Braxston’s friends, as they share their cherished memories of their dear “brother.”

In speaking to those close to Braxston, there are several things that stand out. Braxston was a wonderful father, son, brother, coach, and mentor to the youth in the Hayward, Calif. community in which he resided. To say that he was a hometown hero would be an understatement. Braxston had a fabled high school career, followed by an outstanding National Championship winning career at Notre Dame, and later went on to work with and help the young people in his hometown, because he wanted to make a difference in their lives.

In the eyes of Braxston, there was no such thing as a stranger. Lisa Boykin (ND ’88) told me a story about Braxston walking down the street in San Francisco recently. There was a homeless person sitting down on the sidewalk, who stood up and held out his hand as Braxston approached him; and what did Braxston do? He reached out to the man, took his hand, said “brother,” and hugged him. The homeless man returned Braxston’s embrace with a somewhat shocked look on his face, and then turned to Braxston and said thank you. “Braxston saw and recognized the humanity in this man, as he did with everyone,” Lisa said.

Braxston’s favorite way to address people was to call them “brother.” Everyone who knew him or interacted with him in any way, knew that “brother” was his favorite word. I think that speaks volumes about his character and who he was as a man. He never met a stranger. Braxston had this infectious laugh. He was always smiling. He always showed love to others. Braxston was kind and gentle; our gentle warrior. It was sometimes hard to believe that he could be so ferocious on the field, and then be as kind and loving to everyone as he was. Braxston was a devoted father who adored his children, loved working with young people, and was an exceptional coach and mentor. Braxston had the gift of being able to speak to the dreams of the young people he worked with as a teacher and coach.

He offered them encouragement, and showed them his own vulnerability by sharing his personal successes and failures. Braxston was genuine, and embraced everyone with a warmth and charisma that was infectious. That was Braxston Banks.

Even in high school, Braxston used his success on the football field and his popularity to build people up, and not tear them down. There was a fellow classmate of Braxston’s, an underclassman, who was being picked on at school. The kid being bullied was a scrawny kid, and Braxston noticed some bigger kids shoving this poor classmate into a locker. The kid who was being bullied also happened to be the younger brother of one of Braxston’s teammates. Braxston in turn intervened. Braxston walked down the hallway, with his arm around this kid, and said to the bullies, “keep your hands off, that’s my boy.”

I also had the chance to catch up with one of Braxston’s teammate and roommate from Notre Dame, Patrick Terrell.

“Braxston’s the closest friend, the best friend I’ve ever lost. Braxston was such a beautiful person, and it’s terribly sad, but it’s hard to not smile when you think about him. We’re all going to miss him, but no one is ever going to forget how much joy he brought into each and every one of our lives, in a truly special way.”

“I met Braxston on my recruiting visit to Notre Dame. He was my roommate at the Morris Inn. Here he was, this big, tall guy, with a tall “flat top” haircut, thick coke bottle glasses, and he turned to me and gave me the biggest hug as an introduction. ‘Hey, I’m Braxston Banks.’ I was completely freaked out. Where I was from in Florida, you didn’t just hug a stranger. But there was something so warm about him; I was in complete awe of his warmth, and from that point forward we were best friends for life. We’ve gone through so much together in our lives. We were from practically the two farthest points in the country; myself from St. Petersburg, Fla., and Braxston from San Francisco, Calif. We were absolutely inseparable in college. They didn’t know him as Braxston, or me as Pat … but instead they knew us as Braxston and Pat. We were best friends, and Braxston has been such an important influence in my life over the years, simply because of the way he viewed things.”

“Honestly, I cannot think of a time where I remember him being upset. I remember when he hurt his knee junior year. He continued playing injured, playing for his team, and you’d never know he was hurt or upset. He was always more concerned about how you were doing, and he was a tremendous listener. He was the person that always brought out the best in everyone, and when people talked about him, it was always positive. He was just such a nice person.” 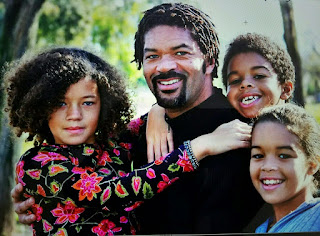 As I listen to his friends and family reminisce about Braxston, it is clear that more than anything, Braxston adored his three beautiful children-- Khabyl, Khorin and Storm.

Braxston’s memorial service is this Saturday, March 18th. In lieu of flowers, his family has requested for the Notre Dame family to please show your love by contributing to a scholarship and education fund for his children. In his absence, we embrace and lift up his kids and know that through them, his spirit lives on. On behalf of his mother, Priscilla, and sister, Nicole, peace and blessings and thank you for your generosity. https://www.gofundme.com/braxston-banks-children-s-education-fund

Please, if you can, help our “brother” Braxston with his children; help his children and their future.