You're Kidding Me, Right? 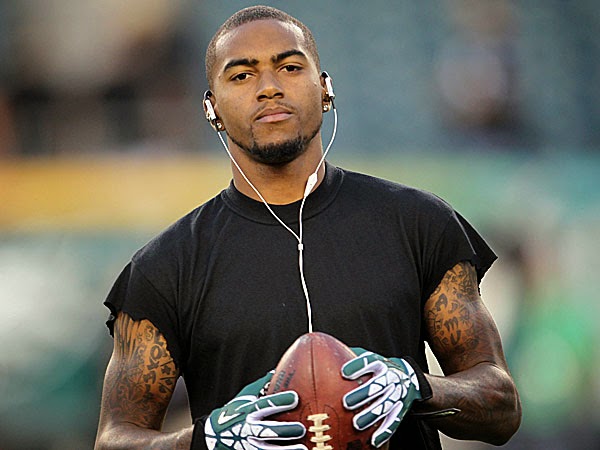 Family – I would like to quickly give you some perspective on an article I read recently ... I hope you enjoy my spout.

When I read sports magazines, articles or postings I usually try to keep an open mind … ya’ know … take a look at things from different perspectives and try to grow from what’s being shared in some way. I would guess that you, the ones who are actually taking the time to read this blog post, do the same thing or in part feel the same as I do.

My usual standard of delectation was completely thrown when I read an article in ESPN the Magazine’s July issue about the Washington Redskins’ recently signed DeSean Jackson.

Now let me be abundantly clear, I am not a Jackson fan… but did come to respect and understand him a bit more after reading the article. What I didn’t appreciate at all, was the incredibly insensitive, skewed, and racially charged quotes from Dr. Harry Edwards that obviously ESPN couldn’t wait to print as said quotes pertained to the future of the NFL and its players relating most specifically to Jackson and his alleged “affiliations.” Just in case you didn’t read the article, allow me to share the small but very poignant section that sent me through the roof … please … allow me to set the stage.

ESPN the Magazine writer, Cord Jefferson, had done a pretty good job of framing why DeSean Jackson’s path had been such a challenging one … from childhood, through college and now as a successful, productive professional with the latest trending topic being attached to him, Jackson had fared well in performing on the gridiron and staying out of the proverbial stereotypical pigeon holes of current or former NFL players. In my mind a great job by Jefferson … helping people get to know who Jackson is and why he is the way he is … bravo!

Here’s the section of the article that made me lose all respect for Dr. Edwards (who my very well be one of the most renowned sociologist and sports historians in the world) or anything he has to say moving forward:

An HBO Real Sports/Marist poll from October of last year showed that 66 percent of Americans with a household income of $50,000 or more had heard a great deal or a good amount about football head injuries, compared with just 47 percent of nonwhites had heard nothing about football-related concussions, compared with 12 percent of whites. ‘In a decade, the only people who are still playing football will be African-Americans and working-class people,’ says Edwards. Edwards predicts that as the talent pool skews even more black and working class, the “baggage” that comes with these players will only become more prevalent. So, he says, the NFL needs to find ways to better understand players’ struggles to balance career over background. ‘What the Eagles were dealing with in terms of trying to come to grips with DeSean is what the whole league should be preparing for,’ he says. ‘Because that’s who’s going to be playing football. To think you’re not going to find anybody in football with baggage is preposterous’[1]

What I don’t completely understand nor appreciate very much is where Edwards’ perspective is coming from and how he, of all people, could put such a slant on what will happen in the future of the league. First of all, who uses a “poll” that was taken on HBO’s Real Sports as a credible source for scholarly research? It’s all opinion … just like this blog post. Look people … I could always attach a poll to one of my blog posts, cite its results and throw some jargon behind it; does that make it (the results) worth anything more than the keystrokes it took to put it there?

Who cares that over 60% of the NFL is African-American versus only 12% in 1959? What does that even mean? Have we truly returned to the age-old stereotype of “there goes the neighborhood” since the African-Americans (code for “Niggers”) and working class (code for “White Trash,” “Beaners” and anyone else who isn’t of means) have arrived? Why is it important to underscore what’s already being over publicized? I mean … did you really need to use Aaron Hernandez as an example?[2]

Just so I’m clear … Is the implication here simply that African-Americans and Working Class People have more “baggage” than people of means? You’re kidding me right? That may be the single-most unrealistic, uneducated thing I’ve ever heard a supposed scholar say. EVERYONE has baggage … even those with means … the difference from my opinion is that African-Americans and Working Class People don’t have the strength, time, energy, power, clout, standing, nerve or patience to ignore the issues they have. They simply deal with them the best they have the capacity to and move forward.

Just because a class of people has the wherewithal to live in a comfortably uncomfortable state of plausible deniability doesn’t mean they have less baggage! C’mon Harry… dammit; you’re from East St. Louis for cryin out loud!

Why in the world would anyone believe that all of a sudden gang-related activity is becoming a threat to the NFL? Really? Pssshhh … I’m not even going to dignify that thought with a response other than ---> get a grip! As long as there have been gangs, are gangs and will be gangs they had, currently have and will have some influence on the student-athletes who participate in sport; whether it be in high school, collegiate athletics or professional sport.It is what it is… and at the end of the day the decision lies with the individual.

What’s even more disturbing is the supposition that the NFL would actually take the time to “better understand the players’ struggles.” Anyone who’s ever played a down in the NFL knows it’s a business … just that … nothing more.Some may even go so far as to say it’s modern day slave trade wrapped up in a pretty little bow consisting of great ad campaigns, social media and billions of dollars … but hey … what do I know? I’m high school football coach.

You know what ..? I may be overreacting a bit … I get that … I just have a hard time hearing an African-American man make sententious remarks about the very culture he came from as if it’s some form of inoperable cancer.

People make choices every day ... some good and others bad. At the end of the day as young people we didn’t have a choice about where we were raised or where we came from … but we do have a choice now … we can ascertain with absolute certainty how far we allow that culture to penetrate who we are and who we want to become.

DeSean Jackson obviously gets that … I would think a learned man more than four decades his senior would get it too… especially being a professor emeritus in sociology of sport at the very university Jackson attended …. Oh yeah … and played football with all the other Working Class People and African-Americans.