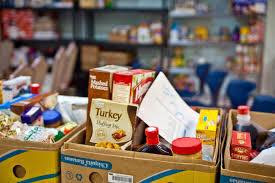 The Bread of Life Food Drive (B.O.L.D.) began back in the spring of 1992 through the ND Alumni Club of Staten Island.

In the spring of 1992, Father Malloy, President of the University of Notre Dame asked each Notre Dame Alumni Club across America to give a “gift” to their local community in the name of Notre Dame, in celebration of the 150th anniversary of the University. The University of Notre Dame Alumni Club of Staten Island decided that a food drive, to be held in the spring of 1992, would be their “gift” to the Staten Island community as requested by Father Malloy. The club called their springtime food drive the “Bread of Life Food Drive” and the food drive provided 5,000 items of food, collected from seven schools, and distributed to three local Staten Island not-for-profit organizations who served the hungry, homeless and families in need.

Feeling very proud of their accomplishment, the Staten Island club thought this would be a one-time event. However, each of the three recipient organizations thanked the club for their donation of food and told the Bread of Life organizers they had never received food donations in the spring time. It seemed that only Thanksgiving and Christmas were times when food drives were held to support these not-for-profits.

So, inspired by this revelation from the not-for-profits, and with a little inspiration from the Holy Spirit, the Notre Dame Club of Staten Island decided to hold a second spring food drive in 1993, and increased the number of donor schools, recipient organizations and total items of food collected. And thus, eventually became the “Bread of Life Food Drive."

Several years ago, former Notre Dame Head Coach Lou Holtz and the Lou's Lads Foundation asked each Notre Dame Alumni Club to hold a Bread of Life Food Drive. Most food pantries receive food donations during the holiday season in November and December and by the spring are getting low on food. The Bread of Life Food Drives are held in the spring to help restock local food pantries. Nearly 50 million people in the United States, or 1 in 6 Americans don't know where their next meal is going to come from.

The Notre Dame Club of St. Louis will be dropping off all of the food we collect during our 2017 campaign at the Immaculate Conception Food Pantry, in Maplewood, on Saturday, May 13th.

We will also be collecting food donations from club members, as well as volunteering at the food pantry, from 9:30am - 11am. We will also have a Lou's Lad in attendance, former Notre Dame football player, and Kirkwood legend, Alvin Miller.

Please let me know if you have any questions or are interested in helping/participating in our food drive. Here is my contact information: Lisa Kelly, LKND93@sbcglobal.net, 314-497-8367